Posted by Philip Shropshire at 3:15 PM

The author must be delusional.

Actually, the author uses words like "delusional" and "magical" repeatedly to attempt to produce the desired lack of critical thinking in the listener.

It's a standard technique, but it's poorly done because it's done so blatantly and condescendingly. A less heavy-handed approach would probably be as effective and it wouldn't be so obvious as to make the listener aware that you're brainwashing him or her into accepting things uncritically.

As a professional writer, this is the very sort of thing I work to keep out of my writing. My natural tendency is to pull this sort of con, but it's really not conductive to rational, logical discussion.

I agree that its not nice. But why are atheists like myself such mean cold hearted people? Have you seen the story about the family that's suing th e minister who convinced a loved one to stop taking chemo and use the power of prayer? She died of course.

Someone should have given that woman a mean dose of reality and told her that one, prayer doesn't work--and even if it does it certainly doesn't work as well as scientific therapy--and two, that the her belief system is in fact magical and delusional.

The reason why I think people like Dawkins and Harris--he's really mean--take such a strident tone is that one situation is really the global situation. We're all just sitting around waiting for confident Christians with nuclear weapons to meet confident islamic extremists with nuclear weapons to have their final conversation. Two groups that are immune to logic and who quite frankly aren't interested in this world but the fantasy afterlife--full of virgins in one case and watching loved ones, probably, burn in hellfire for eternity in the other case--and they're sure that they're not wrong.

The result could well be the end of humanity. People like Harris and Dawkins are saying the not nice things that should have been said to that woman who chose prayer over chemo: your beliefs are not worth killing or dying for. If someone had, rude though they may have been, she might still be here. Atheists are trying to, even if its not nice, to reduce the amount of people who are certain of their happy ever after afterlives. By doing that they are doing humanity a tremendous service....

Extremist atheists like Dawkins are just like all the other extreme religionists. I think it's something in the brain, personally....

I don't think most atheists are cold-hearted, though. They're normal people, like Christians and Mormons and even Republicans.

As for the woman who stopped taking chemo...two comments on that.

One, as a Christian, I've talked Christians into using medicine because it is something God has made available to them. It's the old "God will provide" joke: God says to the recently deceased and very upset-at-God man "I sent you a truck, a boat, and a helicopter -- what more did you want?"

Two, I don't know the case you're referring to. But I know several people who used God as a convenient excuse to get what they really wanted for themselves, namely to let go and not go through the chemotherapy. Family and friends won't accept "I don't want to live so bad that I'm willing to suffer that much, only to die anyway" from patients.

My Dad refused a liver transplant, and to my own shame, I fought him on that. I didn't want to lose him, and I wasn't willing to hear him say "Living longer isn't worth what it would cost, financially or physically." So he started coughing up all sorts of religious stuff to justify doing what he wanted to do and was quite reasonable in choosing.

Bitch-slaps to myself. I was selfish and just made his dying harder on him.

I really should do a parody of that video, though. I think I could do a great "Mormon, Mohamed, and Dark Matter" one that would be hysterical. There's lots of "magical" things about dark matter, almost no evidence, and unless you've actually studied the quantum and astrophysics, it does sound delusional. "Ghost" matter that passes right through you and can't be seen? Magical particles that leave no trace of their existence?

I really should. Can't be bothered. Then again, it would be funny.

I could also do the same thing for string theory with its "magical" dimensions and complete lack of proof. There's nothing in the Bible that's a hundredth as unbelievable as even the basics of string theory. But I happen to like string theory (brane, actually) and it's under attack right now. Such a joke would possibly harm the study of string theory. 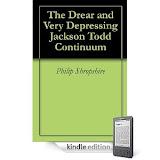